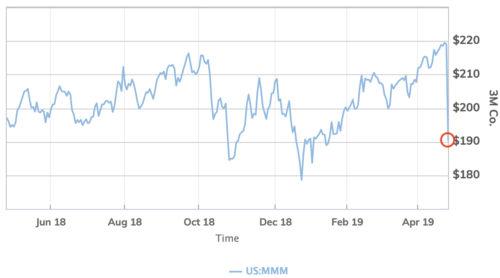 Shares of 3M Co. plummeted toward its biggest one-day decline in over 30 years, after the industrial, health-care and consumer products company reported missed profit and revenue expectations, slashed its full-year outlook, and said it was cutting 2,000 jobs…. The percentage decline was second only to the 26% plunge on Oct. 19, 1987. That is the day referred to as Black Monday, with the Dow registered its biggest-ever one-day crash with a 22.6% tumble.

3M (NYSE:MMM) stock took its worst cliff-dive in thirty years today because its revenue plummeted this past quarter. Its stock had been on the rise all year as part and parcel of the recent market-wide rally, showing just how quickly things can turn bad, and how little those bidding up a stock often know about the current business of the company they are buying. It did not fall due to rising costs or bad management, but due to falling sales in almost everything.

3M’s worst declines came in its manufacturing for industry and for electronics and energy where revenue was down 6.6% and 11.9% respectively. Now, I know 3M makes a lot of tape, and the government buys a lot of red tape, but I don’t think you can blame this plunge on the government shutdown either, as has been popular in the undeserved euphoria of this earnings season. The business simply wasn’t there to be had.

When you think about what 3M makes you realize it may be a harbinger of the recession I have been predicting for this year, and its graph of what happened today may foreshadow what the stock market looks like soon, too.

What does 3M make?

In short, if 3M sales are coming unglued that badly, it’s because industries in the areas 3M sells to are falling off badly. You can’t mask the problem by claiming Amazon (NASDAQ:AMZN) is preying on its sales because 3M isn’t retail. It’s not due to its products going out of style because 3M isn’t stylish. Its products are the meat-and-potatoes ingredients that go into everything else.

How bad was it?

Analyst Jim Corridore said the quarter was “bad across all fronts.”

Or as 3M CEO Mike Roman put it:

We continued to face slowing conditions in key end markets which impacted both organic growth and margins.

It is, in other words, just general industrial slowdown affecting one of the biggest global giants that makes a little bit that goes into everything else that everyone else makes, even if it is just the Post-it notes the secretaries in every business place on documents they send to the bosses for signatures or the tape they would like to place across the boss’s mouth some days.

Chief Financial Officer Nick Gangestad said the industrial business saw a “broad-based slowdown across most of its portfolio,” highlighted by a 9% drop in its automotive business, including a 6% decline in car and light-truck builds.

Its decline in business was global, including in the US, though the fall-off was not nearly as severe in the US. Earnings dropped from $2.50 per share to $2.23, causing 3M stock to fall in one day from its peak for the year to date almost back to where it started the year. Looking forward, 3M cut its guidance for all of 2019 by 11%, so they are not anticipating business to improve anytime this year. 3M’s crash alone, took 190 points off the Dow.

Editor’s Note: The summary bullets for this article were chosen by Seeking Alpha editors.