By James Wood For Mailonline

The pound surged against the dollar and the euro this evening over hopes a deal might be reached with the European Union ahead of the Brexit deadline.

It comes as Boris Johnson and Leo Varadkar emerged from last-ditch Brexit talks tonight insisting they can see the ‘pathway to a deal’ – as the clock runs down.

The PM and the Irish Taoiseach sounded an upbeat tone after meeting face-to-face in Cheshire to try and find a way through the deadlock. 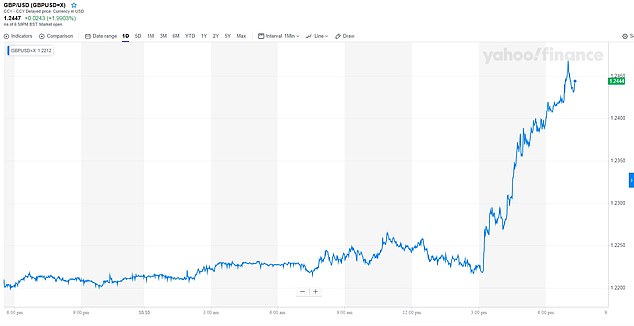 Sterling rose by as much as 1.9 per cent against the dollar to around $1.24 following the meeting between the two leaders 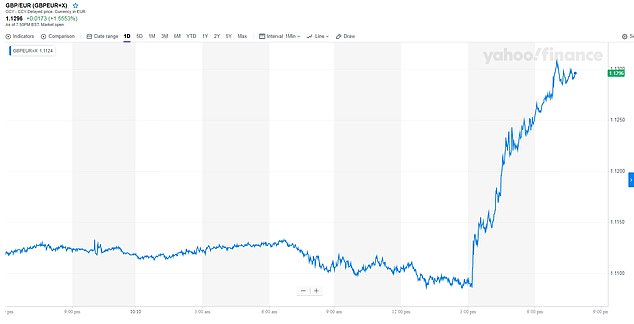 While against the Euro, the pound grew by 1.5 per cent to €1.13. It comes as Boris Johnson and Leo Varadkar emerged from last-ditch Brexit talks tonight 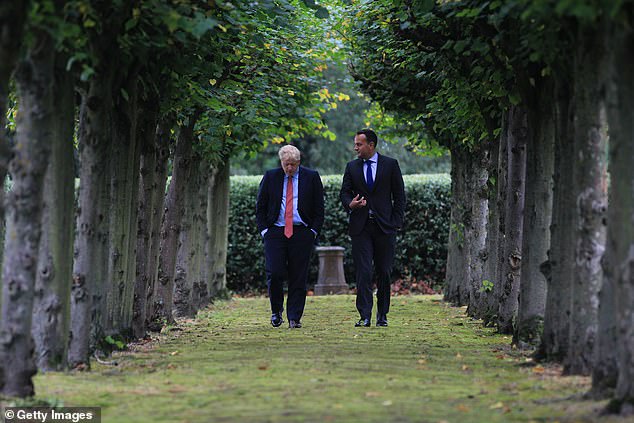 In a joint statement, they said their three-hour discussions were ‘detailed and constructive’, and officials will continue to ‘engage constructively’.

The FTSE could have risen higher today but was stunted by the strong pound rising, with traders feeling more confident that a Brexit extension or a deal is on the way.

The pound was also boosted by decent GDP figures suggesting the UK will avoid a recession.

Senior market analyst, Fiona Cincotta at City Index, explained: ‘There is a real sense that this is last chance saloon. Investors are watching closely to see if a deal can be pulled from these final talks.

‘The fact that sterling remains above 1.20 dollars suggests that pound investors are still optimistic that the UK will avoid a no deal Brexit.

‘At these levels pound investors are pricing in an extension, rather than a Brexit deal or no deal Brexit.’ 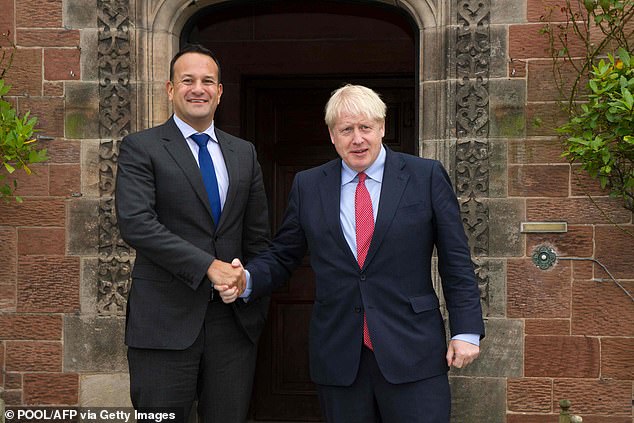 Answering questions from reporters today, Mr Varadkar talked up the prospects of an accord being struck.

‘I am absolutely convinced that both Ireland and Britain want there to be an agreement,’ he said.

‘It is possible to come to an agreement, to have a treaty agreed to allow the UK to leave the EU in an orderly fashion, and to have that done by the end of October.’

But in a word of caution he added: ‘There is many a slip between cup and lip.’

He also stressed again that there must be ‘no customs border between North and South’ on the island of Ireland.

The news comes as it was revealed UK GDP grew by 0.3 per cent between June and August compared with the previous three months, driven by a boom in television and film production, the Office for National Statistics (ONS) said.

The figure, a boost from growth of 0.1 per cent in the three months to July, came despite continued poor performance among manufacturers as the market attempts to prepare for Brexit.

Disaster for Labour as deputy…

It was gut-wrenching: Berlin Wall…

Man stabbed to death in…

Harry and Meghan visit the…

39 bodies found in back…